February 5, 2020 by The Business Research Company

India’s psychiatrists’ market, despite its small market share in 2019, will be the second fastest growing market up to 2023, at an annual growth rate of 13.4%, reaching around $2.57 billion. In 2019, the Indian psychiatrists’ market was valued at around $1.6 billion, accounting for 0.8% of the global total. The small size of India’s psychiatrists’ market relative to other countries’ markets is attributed to the low awareness of mental health and low spending on mental healthcare in the country. India spends around 0.06% of its health budget on mental health, whereas most developed nations spend over 4%. The market is, however, supported by the presence of a large patient population with mental health and substance use disorders. As of 2017, there were about 239 million people with mental health and substance use disorders in India. A 2015 Word Health Organization study shows that one in five Indians may suffer from depression in their lifetime. There is also increasing awareness of mental health in the country, increasing healthcare expenditure, growing medical tourism, and increasing government support for mental healthcare. The Mental Healthcare Act, 2017, enforced the provisions for health insurance providers to insure mental illness, to increase the scope of health insurance coverage in the country.

The USA was the largest country in the global psychiatrists’ market in 2019, accounting for around 44% of the global total. Going forward, China will be the fastest growing country in the market, at an annual rate of 19.1%. 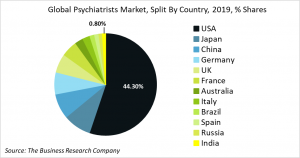 A study was conducted by the Federal Ministry of Health Amanuel Mental Specialized Hospital, Addis Ababa, Ethiopia, in India, in 2017, regarding patients’ satisfaction with psychiatric care. According to the study, the overall satisfaction of Indian patients receiving psychiatric care stood at 90.7%. 71.4% of patients were highly satisfied with the interaction of doctors, about 62.4% of patients were pleased with time spent with doctors, around 57% of patients were satisfied with the psychiatric services received. The highest satisfaction was observed among patients suffering with depression, followed by patients suffering with anxiety disorder, and bipolar and schizophrenia patients being the least satisfied. Satisfaction was significantly higher in female patients than in male patients. Consumers aged 35-60 years were significantly more satisfied in the technical quality of the professionals, their interpersonal manner, and lower satisfaction in financial aspects than younger patients.