Innovations In The Diabetes Therapies Market

February 6, 2020 by The Business Research Company

Novel techniques relating to diabetes therapies research and development include gene editing, and identification of microbial strains for treatment of diabetes. These advances have created new treatments for diabetes. For example, in December 2016, researchers at Lund University Diabetes Centre in Sweden, worked on CRISPR, a genome modification tool. This resulted in turning off of one of the genes which was responsible for causing diabetes. This effectively decreased beta cell death and increased insulin production in the pancreas. Again, in March 2018, a research group in China identified a group of Short chain fatty acids (SCFA) producing gut microbiota. It was observed that they can alleviate the symptoms of type 2 diabetes in patients consuming a diet high in fiber. This aids in blood sugar level reduction and body weight in patients under study. Insulin maker, Novo Nordisk, has developed a diabetes pill and it is expected to be launched in 2020. This pill belongs to a blockbuster class of drugs, glucagon like peptide-1 (GLP-1s), that stimulates insulin production. The new drug is expected to generate about $5 billion in annual sales. Novo Nordisk is a healthcare company, engaged in the discovery, development, manufacture, and marketing of pharmaceutical products worldwide.

The global diabetes therapies market is expected to grow from nearly $54 billion in 2019 to around $69 billion in 2023 at a compound annual growth rate (CAGR) of 6.4%. Diabetes drugs can be classified as oral or injectable drugs. Oral drugs are mainly used in the treatment of type 2 and gestational diabetes, to control blood glucose levels. Injectable therapies include insulin administered through the use of insulin pens and insulin syringes. Insulin pens and syringes are used for injecting insulin into the body, mainly for the treatment of type 1 diabetes. In some cases, type 2 and gestational diabetes patients also require insulin injectables. 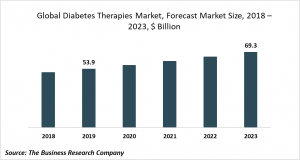 Pharmaceutical companies in the diabetes therapies market are increasingly collaborating with research organizations to discover novel ways to treat diabetes. This enables accessing and integrating technologies to develop new drugs. EIi Lilly partnered with China’s National Center for Cardiovascular Diseases (NCCD). The partnership is across four strategic initiatives to advance the scientific understanding of type 2 diabetes and related complications, such as cardiovascular disease (CVD). This partnership is aimed at the development of a simple cardiovascular disease risk calculator and also identify new biomarkers for diabetes progression, diabetic kidney diseases (DKD), and CVD. Similarly, in February 2016, ViaCyte and Janssen Biotech entered into a rights agreement with Janssen Research & Development LLC (Janssen). There was an agreement to consolidate the assets of the Janssen BetaLogics group into ViaCyte to find a cure for Type 1 diabetes through stem cell treatment.