An industrial gas can be organic or inorganic, and is manufactured in compressed, liquid, and solid forms. Industrial gases are also referred to as bulk gases or commodity gases. Industrial organic gases include acetylene, chlorofluorocarbons and chlorodifluoromethane. Industrial inorganic gases include hydrogen, carbon dioxide, nitrogen, oxygen and helium. Segmented by type of gas, the global industrial gas market is split into hydrogen, oxygen, carbon dioxide, nitrogen and others (acetylene, helium, argon and other rare gases). 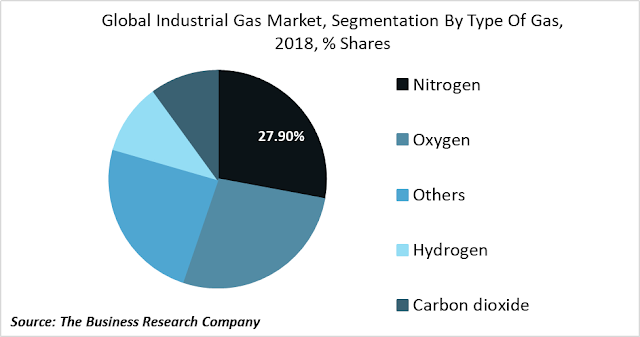 The global nitrogen market was the largest segment of the industrial gas market in 2018, accounting for 27.9% of the total share. Nitrogen is mainly used for cooling and as an inert atmosphere. Liquid nitrogen is used for cooling in many industrial processes and in the food industry. Gaseous nitrogen is used to form an inert blanket over substances that would otherwise be oxidized by air. Nitrogen was the largest segment due to the presence of established pharmaceuticals, food processing and general manufacturing industries that use nitrogen. Nitrogen NF is used as a cryogen to freeze and preserve blood, tissue, and other biological specimens. It is also used to power medical devices. Nitrogen in combination with other welding gases is used to weld auto parts, frames, mufflers, and other components. The nitrogen market will grow to $35.0 billion in 2022 at an annual growth rate of 6.5%, and will continue to lead the industrial gas market segmented by type of gas.

The fastest growing segment of the industrial gas market to 2022 will be the oxygen market, at an annual growth rate of 6.6%.