Growing Demand For Smart And Wireless Audio and Video Equipment

February 17, 2020 by The Business Research Company

There is also increased demand for smart televisions, which is being driven by the increasing consumer preference for built-in smart functions in personal devices, and increasing internet penetration. A smart TV combines the features of televisions and computers, and comprises a television set with integrated functions for internet use. Smart TV users are also offered direct access to streaming services such as Netflix and Amazon Prime Video. To capitalize on this trend, television manufacturers across the world are entering the smart TV market. According to an IHS Technology report, 48.5% of televisions shipped globally in 2016 were smart TVs, and the number is estimated to reach 134 million by 2020.

The global audio and video equipment market, after experiencing a decline in the historic period, is expected to remain stable at around $160 billion from 2019 to 2022. 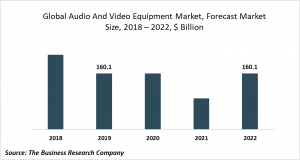 Another trend in the audio and video equipment market is the increasing demand for wireless audio equipment. This is due to the increasing popularity of mobile devices, and changing media consumption behavior of consumers. Consumers are increasingly using mobile devices, tablets and laptops to wirelessly play audio on speakers. Such consumer behavior is driving the growth of Wi-Fi and Bluetooth connected speakers. To capitalize on the growing popularity of wireless audio equipment, manufacturers such as Samsung, LG, Sony, Bose, Denon, DTS and Qualcomm are also launching wireless audio products or platforms. Popular Wi-Fi audio equipment include Sonos Wi-Fi speakers, Bose’s SoundTouch system, Amazon’s Echo speakers.