Chewable tablets are increasingly being used to prevent animals from being affected by ticks, worms, fleas and others. Such tablets are usually soft chew and are available in different flavors such as beef-flavored tablets. Treatments with these tablets are easier to administer than with regular tablets as they can be easily added to regular meals of animals. Many veterinary medicines manufacturers are constantly working towards producing effective and easy-to-give drugs to succeed in the highly consolidated animal medicine market. For instance, in July 2018, the US FDA approved NexGard (afoxolaner), a chewable tick tablet marketed by Boehringer Ingelheim, a German pharmaceutical company. The tablet kills certain black-legged ticks, as well as American dog ticks, lone star ticks, and brown dog ticks to prevent flea infections in dogs. 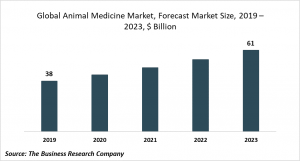