December 13, 2019 by The Business Research Company

A capacitor is a device used to store an electric charge; it consists of one or more pairs of conductors separated by an insulator. Supercapacitors/ultracapacitors are capacitors with capacitance values much higher than basic capacitors, and can deliver a charge much faster than batteries. Historically, the global supercapacitors/ultracapacitors market increased from $0.4 billion in 2014 to $1.2 billion in 2018 at an annual growth rate of almost 30%. This rapid growth was due to increasing demand for electronics products including laptops and smartphones globally. Supercapacitors are generally used in some premium models of smartphones, laptops, digital cameras and various other electronics products. Increased access to the internet globally boosted the demand for smartphones, communication devices, network hardware and computers, thereby increasing the demand for supercapacitors. In 2017, production for the global electronics and information technology industries was estimated at $2,680 billion, a 3% increase from $2,610 billion in 2016.

The also benefitted from the growth in investments in the wind energy industry. Ultracapacitors are being used in wind turbines for providing power for blade pitch control as they have higher operational efficiency than the previously used battery and hydraulically actuated pitch control systems. In pitch control, the wind turbine blades are adjusted by a few degrees when the wind changes, to keep the blades at the optimum angle to maximize output for all wind speeds. In 2017, the capacity of wind power generation globally increased by 52 GW. This rise in wind power generation capacity increased the demand for ultracapacitors and drove the market during the historic period.

Going forward, the global supercapacitors/ultracapacitors market is expected to grow to $4.6 billion by 2023. 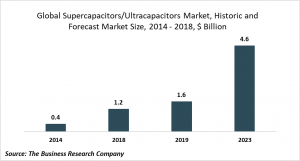