Plastic pipes are normally used for local movement of liquids and gases. Raw materials such as Polyvinyl chloride (PVC), Polypropylene (PP) and Polyethylene (PE) are used in manufacturing plastic pipes and shapes. In manufacturing units, the materials such as PVC, PP and PE are further subjected to various processes such as pipe extrusion, jointing, injection molding, blow molding and rotational molding to manufacture plastic pipes and shapes. There are two common pipe size standards: the American standard, which is in imperial units, and the European (DIN) system which uses metric units. The common standard pipe dimensions range available from 0.5 inch (15mm) to 36 inches. The industrial sector mainly uses PVC and PE pipes, and the residential sector uses polythene or PVC pipes for water supply systems.

In 2018, the Utah Water Research Laboratory, a research institution at Utah State University, USA, conducted a study on 23,803 pipe failures in the USA and Canada. Cast iron pipes (28%) and ductile iron (28%) were the leading materials susceptible to cracks. The study revealed that polyvinyl chloride (PVC) pipes had the lowest failure rates, causing only 22% of the failures. The study also revealed that main water supply operators were gradually shifting to PVC pipes, with up to 74% of utility companies already using them.

In 2015, Trenchless Technology, a USA-based online magazine serving the underground infrastructure industry, conducted a survey among American municipal sewer system operators and consulting engineers. According to the survey, 83% of respondents chose PVC pipes for new projects. Other materials chosen included HDPE (63%), ductile iron (50%) and concrete (30%). The survey also revealed that price, location and longevity were the main factors driving the choice of plastic pipe materials for new projects.

The global plastic pipes and shapes market is expected to grow to $137.1 billion in 2022 at an annual growth rate of more than 6%. 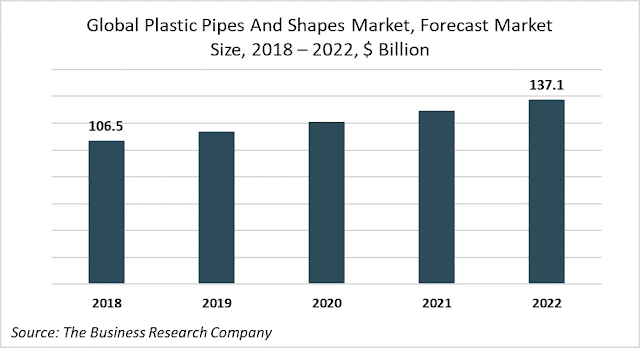 The plastic pipes and shapes market is expected to benefit from the increasing awareness of advantages of plastic pipes and fittings over their substitutes. Plastic pipes and fittings are lighter in weight and cheaper than traditionally used metal pipes, and they do not rust or corrode. Plastic pipes also have insulative properties, which prevent the forming of condensation on pipes carrying cold water and decrease the heat loss in pipes carrying hot water. Other benefits of plastic pipes include quick installation times and long service life. According to a report by the European Plastic Pipes and Fittings Association (TEPPFA), the installation time for a PVC pipe was around 30% faster than a concrete pipe of the same size. These factors are likely to boost the demand for plastic pipes and shapes and drive the market going forward.