This preference for online streaming services will drive the global web content, search portals, SEO services and social media market, which is expected to grow from $391.9 billion in 2018 to $772.9 billion in 2022. 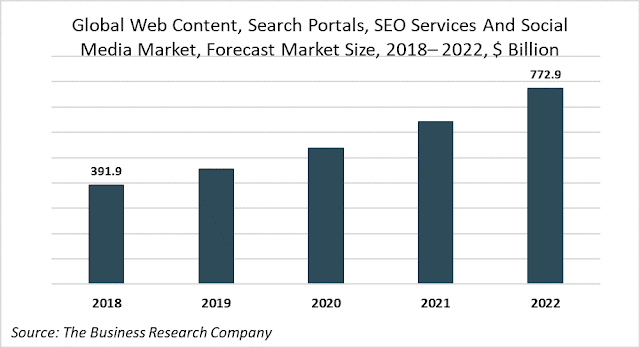 Video streaming is also becoming popular among gen X. According to a survey conducted by PwC in 2017, among 1,986 Americans aged 18-59 with household incomes above $40k, streaming video is now popular among middle-aged Americans. The survey revealed that 8 in 10 adults (35-49 years) accessed TV content from the internet. Moreover, 63% of adults (50-59 years), 90% of adults (25-34 years) and 87% of young adults (18-24 years) are streaming videos. 88% of adults aged 25-34 years watched downloaded or streamed videos on a weekly basis. The study also highlighted that 73% of respondents aged between 25-49 years are now most likely to use Netflix as pay-TV. The original programming is an important factor that has been influencing the subscription decision for 35% of respondents.

Audio streaming is also a popular method used for the consumption of music. A global research was conducted by Ipsos Connect in 2016 to study the behavior of music consumers across the world in 13 of the world’s leading music markets, which are the United States, Canada, Great Britain, France, Germany, Spain, Italy, Sweden, Australia, Japan, South Korea, Brazil and Mexico. 35% of respondents aged 16-24 years pay for an audio streaming service. 52% of the younger generation aged between 13 and 15 purchase (physical or download) licensed music. 82% of respondents among this age group access licensed music and 54% of them access licensed audio streaming services. 71% of internet users aged 16-64 access licensed music.