Business strategies adopted by major companies in the podiatry services market include investing in expanding the reach of their healthcare services and improved medical practices to strengthen their service offerings. National Health Service (NHS), the largest competitor in the podiatry services market in 2017, announced to spend $15 million to provide improved diabetic foot care services to more people. It will introduce new multidisciplinary foot care teams in new locations, and will expand existing services. Additional funds are planned to be allotted for assigning specialist nurses, diabetic foot care teams. Kaiser Permanente, the second largest competitor, plans to expand in to new states within the US, by opening new centers and by acquiring organizations that operate centers in those locations. The centers in each of these new locations provide podiatry service, among many others. In March 2017, Kaiser Permanente planned to invest $1 billion to expand its presence on the US West Coast with its initial push move into Washington State. 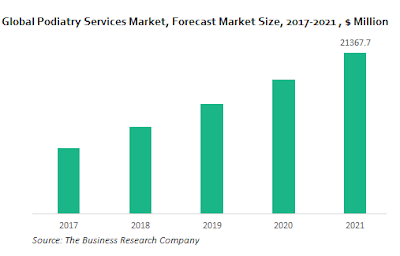 The global podiatry services market is expected to reach above $21 billion by 2021 at an annual growth rate of nearly 2%. This accelerated growth in the market can be attributed to increasing prevalence of foot conditions related to the rising diabetic, heart and overweight population.

The global podiatry services market is highly fragmented, with many individual clinics operating across the world. High fragmentation of the market is mainly due to large number of solo practices by the individual clinicians and competition from non-podiatrists such as general physicians, orthopedists and endocrinologists to offer these podiatric services in many countries. National Health Service (NHS), the largest competitor in the podiatry services market in 2017, is a publicly funded health care system created under the UK’s National Health Service Act., is involved in providing services such as rehabilitation therapy, long term care, assisted/senior living and select care. The institution was launched in 1948. The NHS hospitals provide extensive health care services and outpatient care.