Global economic growth will drive the global audio and video equipment manufacturing market to $342.2 billion by 2021, at an annual growth rate of about 5%. The global economy is expected to go through a continued period of steady growth during 2017-2021. The USA’s economy was already showing some growth in 2014 and 2015, and this is likely to continue during the forecast period. The European market is expected to see growth return later in the period – between 2017 and 2020. Emerging markets are expected to continue to see generally higher levels of growth than the developed markets during this period. For instance, India’s GDP is expected to grow at 7.4% and China is expected to grow at 6.8% in 2018.  This is expected to drive the demand for consumer electronics, including audio and video equipment.

Another major driver of the market was the increase in popularity of audio and video broadcasting, which drove the market to be valued at $288.1 billion in 2018. Online streaming services such as Amazon Prime, Hulu and Netflix emerged as the most popular content broadcasters. For instance, as of January 2018, there were 56.71 million Americans subscribed to Netflix.  As of 2017, there were 90 million members of Amazon Prime in the USA.  The widespread availability of online content led to an increased use of televisions to access video broadcasting services. 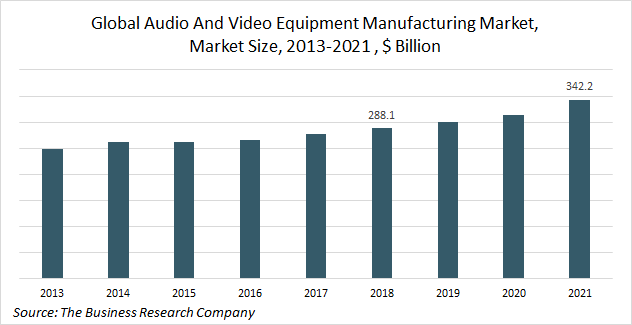 However, a restraint on the global audio and video equipment manufacturing market in the forecast period could be the high degree of price competition. The audio and video equipment manufacturing market is characterized by intense competition. The competition in the market is primarily due to price. For example, Xiaomi, a Chinese consumer electronics company, entered the India market with low-priced televisions, which is expected to disrupt the television market in India. Xiaomi televisions have specifications of high-end televisions, but are priced much lower than their competitors.  The price competition is also intense in the premium TV market.  The prices of ultra-high definition televisions are declining at a rapid rate. 4K TV prices declined from $8,000 in 2012 to $1,250 in 2015, and are expected to decline further going forward.

The increase in interest rates, particularly the USA and Europe, will also hinder market growth. This will decrease the flow of cheap money available for investment, thus making it harder and more expensive for companies in capital intensive industries such as electronic equipment manufacturing to raise funds. For instance, in March 2018, the Federal Reserve hiked its federal funds target range by a quarter point to 1.5%-1.75%.